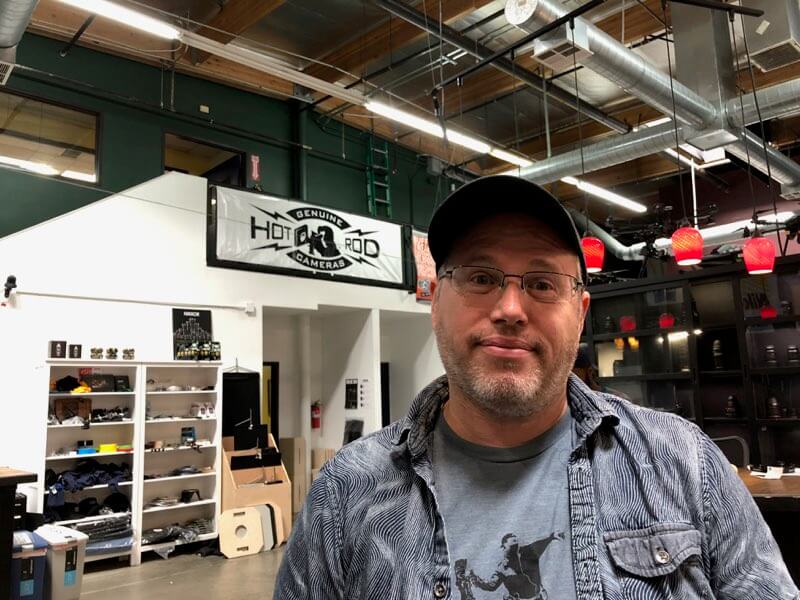 Tell us about yourself and your company, Hot Rod Cameras. What’s your role at the company? How does your company service the film industry?

My name is Illya Friedman, I’m the president of Hot Rod Cameras have been doing this for about 9 years. And I’ve been in the industry for about 25 years. My company primarily sells equipment to studios, individuals, production companies. By individuals, I mean owner-operators. And universities, corporations, we also build studios, we’ve built studios for YouTube shows and all kinds of stuff.

A lot of companies say they specialize in everything. We try to really be highly technically competent about all the stuff that we sell. We sell 300 brands, but were mostly dealers for the top brands. The Arri’s, the Sony’s, the Panasonic’s, RED, that sort of thing. We also are dealers for Leica and some exclusive brands that aren’t really found elsewhere. We’re the headquarters for a manufacturer in Germany called PS Technic too. So we specialize in all of their equipment. We sell lots of lots of rigging, lots of accessories, anything that goes around a camera – lights, lenses, matte boxes, grip equipment, all that stuff. We’re located in Burbank, one block from Arri, one block from J.L. Fisher. We’re online at HotRodCameras.com.

What cameras do you recommend for micro-budget films with film budgets under $100,000?

Some people will shoot on their phone. I don’t generally recommend that. I would say that if you have $100,000 or somewhat less than $100,000, if you can plan to spend about 10% of your budget on your camera department, that’s probably a good idea. Either that’s stuff that you rent or that you would purchase. So if you have about $10,000 to spend, get the best camera that you can in that budget range. For a lot of people, that will be a mirrorless camera. And some of the most popular mirrorless cameras these days are either Sony Alpha series or the Panasonic GH-5 series. Those are probably the most popular.

ILLYA:If you’ve got hundreds of thousands of dollars, you can generally afford to rent, or maybe even purchase a higher-end cinema camera, maybe. And then rent lenses or other pieces that you need to go round it. Arri’s tend to be the most popular, and you can get older Arri cameras for not too much money. Also RED cameras tend to be quite popular under a million dollars. There are some people who are shooting with this new mid-range mirrorless camera. There’s one from Panasonic called the EVA-1, which is really impressive. There’s also stuff from Sony called the FS-7, which is actually been particularly popular for web series and small television series have really been attracted to the FS-7 series, but the Panasonic is the new player in that space or the Panasonic LT which is also a very popular camera for that level of production.

A “mirrorless” camera is essentially a DSLR that doesn’t have an optical viewfinder it just has an electronic viewfinder, an LCD screen. The body can be smaller. There’s fewer power requirements. There’s one less thing to go wrong. DSLR usually couldn’t use the optical viewfinder anyway, because the mirror had to flip up out of the way. So mirrorless cameras are really just the 2018 way of saying DSLR, but it’s really the same class of camera.

4K is the standard resolution these days. There are some people who’ll do less and there are people who will do more. But 4K is basically the standard. Now if you’re at least achieving a 4K original camera master, you’re going to be fine for any distribution source right now, short of IMAX. But even IMAX, some of that’s 4K.

Would it ever make sense to shoot film? Or is that beyond dead for indie filmmakers?

FRIEDMAN: It absolutely could make sense to shoot film. You just have to know what you’re getting into, and you have to know what you’re going to have to do on the post side and how much money you’re gonna have to spend in order to to make that work. You would probably need to be well financed for a film shoot or know that you’re going to have to work in a very different way, including probably having a much smaller shooting ratio.

When you shoot digitally, your ratio can be obscene. When you’re shooting film, you really have to be conscious about how you’re shooting or you’re not going to be able to afford it.

What annoys you most as a DP about filmmakers making low budget films?

FRIEDMAN: Indie filmmakers who are looking for a shooter, a DP, who owns all of their own equipment and that is the criteria for hiring them, not talent or anything else, only “what equipment do they own?” It used to be a bigger deal in the era of film because it was so much harder and so much more expensive. I mean, it’s great if someone owns gear as a bonus, but that shouldn’t be your reason for hiring someone. And I see that all the time on Craigslist ads with looking to exploit someone to bring in. A hundred thousand dollars worth of gear, and then give them a credit on the production and a free meal. I think that Indie filmmakers who are looking to hire a competent DP will have to come up with something better than that.

You want to stretch dollars. But you know what? You can find the right person who may or may not have gear. And if they don’t have gear, there’s a good chance they have access to gear. So that shouldn’t be anyone’s limiting factor.

What do filmmakers overlook budgeting for the camera department?

I would say the number one thing that’s overlooked is appropriate crew size. I see a lot of people say, oh, we’ll get a DP, or maybe we’ll get a DP and one other. And that may not be enough depending on what it is they’re trying to do. So I’d say that appropriate crew size, appropriate assistants, appropriate prep time. Prepping your gear, planning your shot list, looking at locations. It sucks as a DP when you’ve never seen a location before you walk in, and then the director’s got an idea that really won’t work. I would say that communication is super key. Those are all big factors that are usually overlooked by people first starting out.

Where could a film budget save money when budgeting for the camera department?

FRIEDMAN: I would say you can’t save money in the camera department [laughter]. I would say that you probably don’t need every accessory. You probably don’t need everything, but the only way to figure out what you really need is to work with someone who can be can work with the minimum package. Thinking about if you had a fit everything into a backpack, or if they had to put everything into a single case, what is most essential for you?

What’s the future of indie film cinematography look like?

FRIEDMAN: I think the future of indie cinematography is actually being made, not in camera, it’s all the people who are basically shooting log and RAW these days, and a lot of their color grade, the style of what they’re doing is being crafted in post. So I think the best Indie cinematographers are going to know how to shoot it flat and know how to get their image in combination in camera and in post and not trying to make all happen in camera. You have to know that. I think that if you want to be a good, well-rounded shooter, that’s really important.

What’s an example of a micro to low-budget film that achieved great cinematography within a small film budget and/or limited resources? What are the tools and techniques that helped them succeed?

FRIEDMAN: I mean, I guess probably the quintessential examples, something like, EL MARIACHI, I mean something that has very, very low budget and achieved great results. But I believe that is actually, more common these days there are more movies that have really, really high production value with limited resources, and it just comes from being competent with the tools. I feel like there’s always something at Sundance every year, and South By [Southwest] every year that is amazing for the limited resources that they have.

LEAVING LAS VEGAS is a 16mm production done low budget. THE RAID: REDEMPTION, this movie probably had a few hundred-thousand dollars, but like just all shot on inexpensive Panasonic cameras. I sold them their PL amounts. I sold them all their stuff, but it’s an incredible, incredible production for almost no money. LIKE CRAZY. Another good example. It’s a drama love story. But it’s all shot on a Canon 7D.

I believe that anyone can get an amazing production if they’re highly competent their tools.