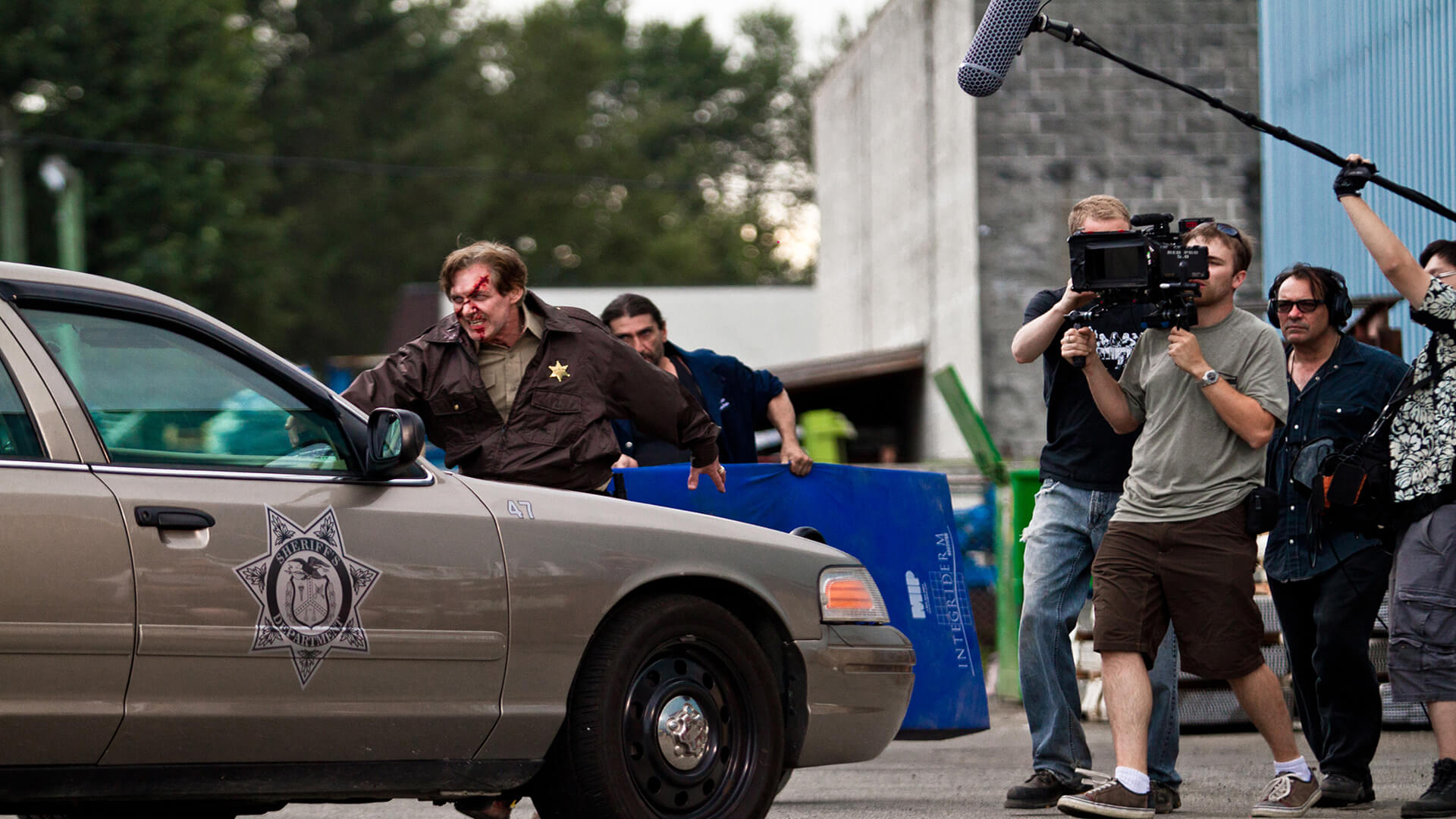 Using SAG actors in a low budget film, or when your film has no budget, or even a shoestring budget, might seem like a luxury for many filmmakers with limited funds. But using SAG actors (members of the Screen Actors Guild) can often make the difference between a bad film and making a good film, if for just one reason only: if your film works with SAG, you have a much larger variety of potential actors to draw from. And that means you have more opportunities to cast the perfect people for your roles — both in terms of flexibility with your schedule and budget, and in just simply raw acting chops and compatibility with you and your team.

What is the Screen Actors Guild (SAG)?

Technically, the guild is called SAG-AFTRA, and it’s a combination of two labor unions that represent not only actors, but recording artists, stunt performs, news writers, DJs, dancers, announcers, and many other professionals in the audio-visual arts.

The two guilds were formed in the 1930’s with the goal of securing labor protections for actors and performers, who were often pitted against deep-pocketed studios and networks who — to put it mildly — weren’t always looking out for the best interests of the professionals who appeared in their films or helped them sell soap on their radio programs.

Today, SAG-AFTRA represents almost 200,000 people, who pool their resources, time, and political clout in order to bargain with an even more ruthless and powerful set of studio and corporate titans. In my opinion, it’s a strong guild, but slightly less stronger than the WGA (Writers Guild of America), as far as its organization and the leverage it brings to bear. That said, its power has been steadily on the rise of late, as its members become more and more active in the wake of recent dramatic political and industrial upheavals (such as the continual undermining of labor unions across all sectors in the United States with “Right To Work” laws platform and other anti-union movements and legislation.

Can I afford SAG actors when budgeting my small film?

Those options are in the form of what SAG calls “Agreements” and they’re branded under a sub-branch of SAG which SAG refers to as SAG-INDIE — focusing on independent and small film.

SAG contracts for small films. All data below is accurate as of 12/14/2018. Make sure to check with SAG-INDIE for the most recent changes, as these agreements do change from time to time.

Under this agreement, your film must be no longer than 35 minutes, your budget no higher than $35,000, and you must agree to pay your SAG actors $125 per day. The good news? That $125/day can be deferred.

The deferment, however, only lasts until you release the film. Which means you have to pay your folks before the film sees daylight on any platform.

Further, the SAG actors you hire have to provide signed consent before the film is distributed in any way. That means you’ll need to get all the SAG actors you’ve used on your film to sign a document, which you provide to SAG, showing that they’ve approved of the film.

Aaaand, not to mention, but you also have to have a producer on the film who is enrolled in an accredited educational institution. (Hence, the “student” in “student film.”) What they mean by “accredited” usually means not an internet college or some other hinky “webschool” or similar. Make sure you check with SAG before you assume your school is accredited.

SAG’s next level up,

…is similar, in that you pay your SAG cast $125 per day. The only differences are that you (a) don’t need their consent to release the film, (b) the film can be longer than 35 minutes, (c) your film’s budget can’t be higher than $250,000, and (d) you can’t defer the actors’ pay, meaning the checks have to be written to SAG so that SAG can pay your actors as you shoot, or in advance.

Worth mentioning is also SAG’s

…which limits your TRT to 40 minutes, your budget to $50,000, and your shooting schedule to a max of 30 days, but there’s no consent required to release your film. Best of all, rates are fully negotiable. Meaning you can work out whatever rate you want with your actors, even if it’s zero.

But I can’t afford to pay people $125 per day, even deferred. What should I do?

SAG actors work all the time on non-SAG projects, for free or for very cheap. We don’t advocate not paying your actors, or trying to skirt SAG regulations, because we believe in the mission of SAG and other film unions.

However, we do recognize the fact that without a constant new crop of up-and-coming filmmakers making films, there’s no next generation of large-budget filmmakers and studio films. And the same goes for actors — without building connections to filmmakers and other industry people, and without getting experience and expanding their skills on film sets, actors can’t grow.

So SAG actors work on non-SAG projects. They do it under the radar, or they do it out in the open. It happens all the time. (Not that we condone it.)

Truth is, SAG can’t track every production and keep tabs on every single actor to determine whether or not the actor is complying with guild regulations by working with SAG-signatory film companies only. But to be fair, SAG does do a pretty good job of keeping things flexible for their members and workable for the non-studio level filmmakers looking to draw from the SAG talent pool.

That said, the more experienced and solidified in the film industry the actor is, generally speaking, the less likely they’ll be to take a chance on doing your non-union film for peanuts or non-SAG rates.

Can you find non-SAG actors who are skilled and awesome? Of course. Are they hard to find? Not at all.

To join SAG, all an actor needs to do is get three credits working as a background actor (extra) on a film or show, and they become SAG eligible, which allows them to pay their dues and join the union, so the bar to being a SAG actor isn’t exactly high, high, high. Which means that just because you’re going SAG it doesn’t mean your film is automatically a better film, but it does mean that you’ll have a larger pool of talent to draw from when casting.

What are the other budget levels SAG agreements offer?

After that, it’s the Low Budget Agreement (max budget $2.5 million OR max $3.75 million if you meet SAG’s Diversity-In-Casting Incentives), where your SAG actors are paid $630/day and $2190/week.

Finally, beyond that is the SAG Theatrical rate, which is for films with budgets higher than $2.5 million, where the actors are paid the full SAG rate, which is $1,009/day or $3,005/week (remember, these rates, like all others in this article, are accurate at time of this article’s publishing, but check with SAG to get the most current rates.)

And remember, with each of these contract/agreement levels comes a lot of other specific rules, requirements, and regulations both you and your SAG talent have to stick to. Like all guilds, SAG is there to protect its people, and if you’re going to use SAG talent, you need to stick to the rules. Understandably, sticking to the long list of rules and requirements (e.g. meal times, call times, turnaround, etc.) is partly why many new or small-budget filmmakers eschew using unions like SAG on their film, but take our word for it: if you can work hand-in-hand with SAG and stay on the up-and-up, your film is likely to turn out much better.

How do I budget for SAG actors on my film’s budget?

First, pick which SAG contract/agreement is a fit for you and your budget.

From there, you can figure out your day rates for your cast and budget accordingly, whether you’re using day rates or weekly rates.

Then, wrangle your fringes. Fringes are the payments you have to pay which are on top of the actors’ regular rates, and include unavoidable charges such as FICA, Federal Unemployment Insurance, State Unemployment Insurance, Worker’s Comp (usually handled by your payroll company as an extra charge), and then your Pension and Health benefits for your SAG actors. These fringes are due for most contracts, but there is considerable leeway given for SAG’s smaller contracts, so talk to your SAG rep before budgeting for fringes. You may be able to defer or skirt some entirely.

When budgeting your actors, you’ll need to figure out how long they’re needed for. A good rule of thumb is to always budget for more days than you think. Most small films are always short on time and cash, and end up having to bring actors back for pickups.

A good AD (1st Assistant Director) or UPM (Unit Production Manager) will help you schedule your actors in a way that makes the most sense, as far as getting the most bang for your buck out of them, so make sure you hire the right AD/UPM before sitting down to budget your film.

Finally, take a breath. I know this is a lot. Making movies for me has always been: pick up the camera, grab some people, and go. But while SAG and other unions do have a way of slowing that whole process down and adding cost to your picture and making it less fun and perhaps more weighed down with paperwork, keep in mind: the truth is that going SAG gives you vastly more options in casting, makes many perceive your production as more legitimate and professional, and, generally speaking, pretty much separates the amateur actors from the professionals. (With the caveat, again, that not all SAG actors are necessarily great. It’s just that with relatively few exceptions, all great actors are pretty much SAG.)

So if you can get used to that fact and you can dial your film in on a SAG agreement that works for you, the rewards can far outweigh the drawbacks, in terms of performance, flexibility to fit your production’s style, schedule, and budget, and just pure professionalism. Not to mention getting you prepared for when you step up to the next level, where it’s pretty much SAG or nothing.

2 Comments on “Should I budget my film with SAG actors?”